The Importance of Catch Basin Repair 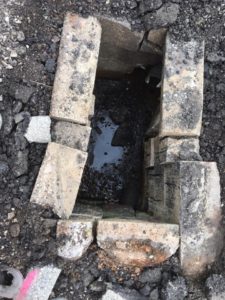 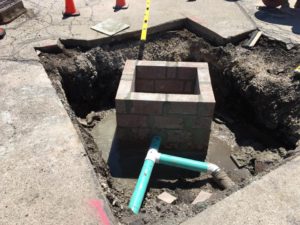 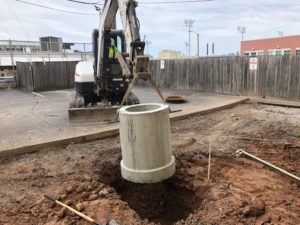 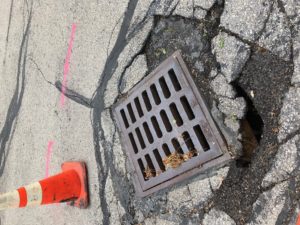 One of the most important elements that determine the performance of a parking lot is how the water is controlled. Water can be corralled in jut two ways. It can runoff the edge of the asphalt into a ditch and/or grass or the water can be directed towards a catch basin. Catch basins are open-grated manholes that have a collector known as a croc. Usually, a pipe is cored into the side of the catch basin where the water escapes and is directed to a bigger storm water system, ditch, or retention pond.

A clear sign that a catch basin is failing is the emergence of a sinkhole near the storm grate. This happens when there is a crack or hole in the side of the catch basin. Water below the pavement surface finds its way through that opening. The water that rushes through that opening “washes away” the stone near the catch basin creating an area where the stone is eroded below the pavement surface. Eventually, this creates a very dangerous sinkhole! Sinkholes can be considered an emergency liability and should be repaired as soon as they can.

How to repair a damaged catch basin?

Attending to catch basins breaks down into three methods, as most objects that require repair; maintenance, repair, and replacement.

Maintenance to a catch basin involves “tuck-pointing” which is the act of spreading cement mortar in between cracks in the croc of the catch basin. This method should be considered a short-term solution and will need to be done on a consistent basis.

Repair of a catch basin includes removing the top section where the opening appears. This can include replacing concrete rings, bricks, and/or a portion of the storm sewer croc. While working to repair this area, new stone is installed surrounding the catch basin.

In the event, the croc has completely failed it should be replaced. Older catch basins are made up of bricks whereas newer catch basin crocs are a poured as one piece of concrete. This prevents the probability of weakened areas developing into holes or cracks causing the inevitable sinkhole.

What type of pavement should surround a catch basin?

There are two options: concrete or asphalt. In the event that the catch basin is in the center of an asphalt section, we recommend surrounding that catch basin with concrete. Usually it is an eight foot by eight foot section of concrete that surrounds the catch basin. The thought process is that a catch basin represents a weak point in the asphalt area. Using a rigid material such as concrete solidifies this weak area.

Catch basins are a very important fixture to a parking lot. They collect water and direct it away from the surface of the pavement surface. If repairs and/or maintenance is deferred, damaged catch basins can cause dangerous sinkholes that can cause injury or damage to vehicles. The best method to catch basin repair is to replace at least to the area that is cracked and surround the catch basin with concrete.

Suburban Asphalt is a family owned and operated paving company founded in 1965 by brothers Terry (Sr.) and Roger Buss. We are located in Franklin, WI and currently provide asphalt services to almost all of Southeastern Wisconsin.